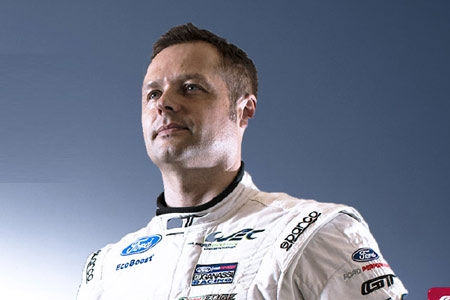 The Ambassador program has been designed to share the learning and skill of the industry’s top professionals in the racing network. The runaway success of the motorsport industry has created fundamental problems where safety is concerned. Racing is a dangerous sport and the SEF ambassadors serve to help progress the SEF initiatives from inception to realization. As our professional network grows we are improving safety conditions in motorsport to minimize the risks outside of drivers’ control.

There are many drivers working as ambassadors for the SEF foundation. One of them is Andy Priaulx born 8th August 1974. What started as a boyhood dream lead him to become a British Motorsport World Champion three times. Andy Priaulx now races for the Ford Chip Ganassi UK Team in the FIA World Endurance Championship.

Born in Guernsey, Andy Priaulx began kart racing at the young age of 8, which progressed him onto powerboat racing and hill climb racing with his father Graham as co pilot. It became rapidly clear that Andy had an incredible capacity for racing when he took his first Championship title in 1995 for the British Hill Climb.

Andy Priaulx has gone on to have an amazing racing career, with no less than three FIA World Touring Car Championship titles to his name. All of his success did not come without huge risk. Back in 1996 he put everything he owned, including his home on becoming a success in Motorsport, and it paid off. He has since gone on to become a triple World Touring car champion, European Touring car champion, winner at the Nuremberg & Sebring Endurance races, and multiple podium finishes at Le Mans & much more.

In 2008 Andy was awarded a highly coveted MBE  for his services in Motorsport in recognition of his third World Titles.

In 2001 Andy stood in for the suspended Phil Bennet when he famously took pole position on his debut at Oulten, showing to everyone that his future was set and his career was going from strength to strength.

The following year he signed with the works Honda BTCC team for their 2002 campaign. He managed to win one race and finished on the podium at two others this year. He then went on to be signed the following year with Bart Mampaey BMW UK team for their European Touring Car Championship. This was an exceptional season for Andy and he was considered a serious contender for the overall title but he eventually finished third.

During that season he was also a guest driver in the Australian V8 Supercar racing team.

In 2004 he went on to become the ETCC champion after a long challenging battle with Dirk Müller both drivers had managed to accrue the same number of points, it came down to race statistics and Andy had won five races Vs three race wins from Dirk, this gave Andy the edge and he won the title.

His success was relentless after this, he went on to win the 2005, 2006 and 2007 WTCC at the final round in Macau. The 2005 season was extra special as he won the title with two second place finishes in the final rounds with his two closest rivals failing to score any points whatsoever.

2006 was extremely tight, a first place in the opening race of the final meeting left him requiring a fifth place in the last event to beat Jörg Müller by just one point...and he done it.

At the final meeting of the 2007 WTCC season at Macau, Andy was the joint leader next to the former champion Yvan Muller. He was placed eighth in his first race then he went on to a glorious win from pole position in the second race to complete his third WTCC championship 3 years in a row!

In 2009 Andy finished fourth, racing for BMW in the WTCC. He also competed in selected rounds of the American Le Mans Series for BMW and a number of races in the Australian V8 Supercars championship, driving a Walkinshaw Racing Holden with David Reynolds at the Phillip Island and Bathurst endurance races.

Priaulx continued to race in 2010 in the World Touring Car Championship for BMW and competed in several races for BMW in the Le Mans Series.

On 5 December 2010, BMW announced that it would not be continuing its factory effort in the World Touring Car Championship from 2011 onwards. Andy Priaulx would instead complete in the Intercontinental Le Mans Cup for BMW, as well as undertake testing duties for BMW.

In 2012 & 2013 Andy raced for for BMW in the Deutsche Tourenwagen Masters, with his best result in the final round of the 2013 season at the Hockenheimring, after starting in third he finished in sixth place.

However, in January 2015 it was announced at Autosport International that Priaulx would return to the British Touring Car Championship for 2015 with West Surrey Racing.

After a 13 years with BMW on December 5th 2015 Andy decided to leave BMW and joined Ford Chip Ganassi Team UK for their upcoming debut in the 2016 FIA World Endurance Championship season where he is still racing today!

Click here to learn more about the SEF Ambassadors and the Sean Edwards Foundation. We have many initiatives related to safety on and off the track. If you can help support our organisation by making a small donation it would be greatly received. As always, #safetyfirst !!

SEF: What’s your favourite circuit and why?

AP: I would probably say Macau, I love street tracks and have had so many good races there, clinched all three of my world championships on this track.

SEF: What do think about motorsport safety? Do you feel it’s too strict with aspects like run offs for instance or should more be being done?
AP: Obviously Macau is a fast track and  safety must be massive consideration. I think that street tracks should always protect the heavy braking zones as much as possible and any form of Halo or head protection for single-seaters would be a positive. I hope that the progress  made in F1 can filter down as quickly as possible to the lower formulas where safety is sometimes not as good as the latest F1 tracks!

SEF: Your best ever race; where and when was it?
AP: I would say that sometimes my best races where not necessarily my biggest wins but more the races where the car wasn’t great and I managed to drive to the maximum of my ability (and the cars potential) and maybe produce a good points hall over what could have been a poor weekend! Being better on your bad days than anybody else is what can help you win championships under pressure.

SEF: Your motorsport hero?
AP: I always loved Mansell; his determination and passion, always 100% and always the fans favourite.

SEF: What is the best race car you have ever driven in a race, and again, where and when?
AP: I always enjoyed the V8 super cars, I won best international driver and finished 2nd overall in Surfers Paradise and also led Bathurst for 29 laps in 2013…I also enjoyed very much the Williams V12 F1 car, I tested this car for BMW in 2005/6, this was amazing!!