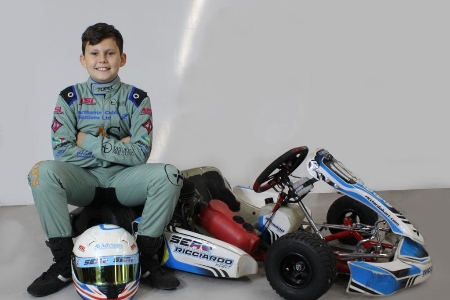 My name is Mackenzie, I started racing when I was 8 and a half years old. At the start of 2017, I was racing full time and spent the first year testing and getting hours in the seat to build on my racing skills.

I was entered into a winter championship in my Honda GX160 where I raced 9 rounds and ended the championship 5th. However, I placed 4th overall in my class which was a great result.

Next, I moved up in class to racing in the Honda GX200 championship. At this point, I was so lucky to have a sponsor come on board to help me with pushing forward. I completed in 8 rounds and finished 3rd overall.

The Sean Edwards Foundation is proud to support all of our young and up and coming drivers!

At the age of just 10 years old, Mackenzie Taylor is already showing that he has the potential to become a good driver.

He has now been karting for 3 years, originally racing in the Honda GX160 class plus Gx200. Mackenzie went on to gain considerable experience through competing and learning from
the competition around him.

2017 saw Mackenzie move up the ladder to enter the Stretton gx200 Winter championship, in which he achieved outstanding results, ending the season in 4th place overall; a fantastic achievement for
the youngster.

Thanks to more exceptional results in 2018, Mackenzie was moved up into another racing Championship for the last three rounds of the season, finishing in the top ten (of a 21 driver grid) in
each race.

Despite his youth, Mackenzie is already planning ahead for what looks to be a bright and promising future, carefully considering his decisions both on and off the track. His ultimate aim is to one day race in the British GT and is signed by a top team
None of his success so far, however, would have been possible without the close support from his parents, older sister and, of course, his sponsors.