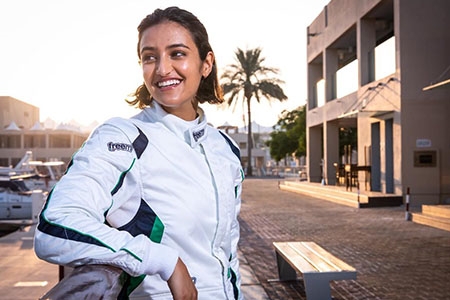 The Sean Edwards Foundation exists to improve driver and circuit safety as the legacy of
professional racing driver Sean Edwards, who was killed in 2013. It is a non-profit
organisation focused on raising safety awareness in motorsport.
The ambassadors working with the SEF are a key tool in raising awareness, amplifying the
message through social media and other means. A wider professional network results in
more exposure which enables the objectives of the foundation to grow and for visions to
become a reality.
As an organisation with a passion to implement change and progression within the
motorsport industry, there is perhaps no more a fitting ambassador for the SEF than Reema
Al Juffali; a woman who embodies a triumph in overriding both cultural and gender
stereotypes in being the first female racing driver from Saudi Arabia.
There are many factors that contribute to how great an achievement this is, none quite as
poignant as 2018 being the year that women were legally allowed to drive in Saudi Arabia.
For the many of us who are privileged enough to have access to a vehicle from a young age
and begin driving as if it were second nature, the idea of being arrested and fined for doing
so is almost inconceivable. Until 2018, this is a reality that Reema was faced with.
Two events in 2018 will ensure this is a year that Saudi Arabia is positively remembered for.
In June, the first driving licenses were issued to women. Just 4 months later, in October - Al
Juffali made her competitive racing debut and cemented her place in history. The history
books are peppered with the stories of individuals that stand out for their radical actions
and refusal to accept limitations imposed on them at the time. Reema will be remembered
as one of these. It is women like Reema that shape our future by defying obstacles and
breaking boundaries. Her story will not only inspire today’s young women, it will continue to
do so for generations to come.
Reema‘s racing performance to date is a remarkable feat in a very short period of time.
Proving that her late entry into the sport does not render her disadvantaged, she has
enjoyed huge successes, setting a standard for what is anticipated to be a long and
successful career.
Reema is not only the first female Saudi racing driver, she is one of just three GCC women to
hold a race licence, and the first Saudi woman to win a circuit race. In the 2018 TRD GT86
Cup at Yas Marina Circuit, Juffali took first place in the Silver Category and fourth overall –
impressing her peers and making her mark as a serious competitor. Unstoppable Reema
turned heads just two weeks previous to the Yas Circuit triumph with a double success at
Dubai Autodrome, securing two silver cup victories.
In a world that is changing in its acceptance of women into sports which have previously
been male dominated, this is an exciting time. If one woman can make history in her first
championship race; it is a promising start for a future in which we may see more and more
women join the sport.
Click here to learn more about the SEF Ambassadors and the Sean Edwards Foundation. We
have many initiatives related to safety on and off the track. If you can help support our
organisation by making a small donation it would be greatly received. As always, #safetyfirst
!!
« Back to Ambassadors